Mysterious Elgygytgyn Lake has meteorite origin and the age about 3.5 million years. The lake is very cold (1 - 3*C only) and deep (180 m). The water is extremely clear - the transparency is up to 40 meter. In the lake dwell 3 species of unique charrs, two of which are endemic species. These two charrs have got into the hands of scientists not long ago (1979 & 1985). They were described as species new for science, and one of them - as a new genera of salmonids (Salvethymus). 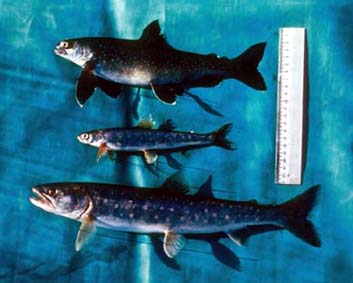 Longfin charr is the most ancient form of all charrs. This fish is spending its whole life at the depths of over 80 meters; only in rare cases it comes close to the lake shore. Longfin charr is a slow growing species - it is reaching about 30 cm in the age of 30 years. This rare charr is feeding mostly by the zooplankton near the lake bottom - a really unique ecological niche!

This small charr is rarely heavier than 100 g. Its growth speed is extremely low - the maximum age of this little fish can be over 25 years. Smallmouth charr is feeding exclusively by zooplankton. It is making daily migrations along the steep slopes of the lake hollow. It is spending the daytime at the depth about 100 meters, and at night it often comes close to the leeward shore.

Except the Elgygytgyn Lake, Boganid charr was found in some other lakes of Chukotka, and at the Taimyr peninsula (Central Siberia). In the lakes of Chukotka this fish can be over 10 kg. In the Elgygytgyn Lake Boganid charr is feeding mostly at the big depth. To digest the food, this fish is often coming close to the lake shore or to the mouths of small inlets, where the water is several degrees warmer.

In some small drainages close to the Bering Strait there are stocks of the American subspecies of Arctic grayling (Thymallus arcticus signifer). This is the same form which is found in many of the waters of North America. This fish is quite different from the common in northern Asia east-siberian subspecies of the Arctic grayling. The T. a. signifer has a rather small dorsal fin with dotted patterns (T. a. pallasi has stripes), and its tail and caudal fin are not red. 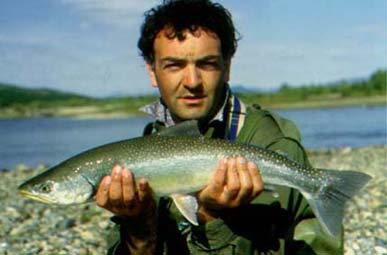 Levanidov's charr (yellowmouth charr) is found only in 3 drainages at the coast of the Sea of Okhotsk - in Yama, Takhtoyama & Penzhina Rivers. This is an anadromous species, which doesn't have any resident forms. This charr is quite different from all other charr species by the absence of the external difference between males and females. Biology of this charr is rather similar to the Dolly Varden charr, but the new species is a more predatory fish. It is easier to catch it with streamers and more difficult - with a dry fly.

Sea-run taimen is known as the most ancient salmonid fish - possibly, the age of the species is 40 million years! This predator can be over 200 cm long with a weight over 70 kg. The species' range is small and includes some Asian-Pacific islands, situated in temperate climate (Sakhalin, Kurils & Hokkaido). At the mainland this fish is found in some of the rivers south from the mouth of the Amur River.

Due to overfishing the species has become rare in the whole range, and in many drainages it is completely disappeared. The stocks of the Sakhalin island are placed into the Red Book of Russia. Biology of this species is rather different from Siberian taimen: sea-run taimen is consuming most of its ration in the salt water. Because of this it is not feeding actively in the river; accordingly, it doesn't bite the lures and flies as eagerly as its resident cousin.

Articles, posted at this web-site      A book "Flyfishing the Russian Far East"