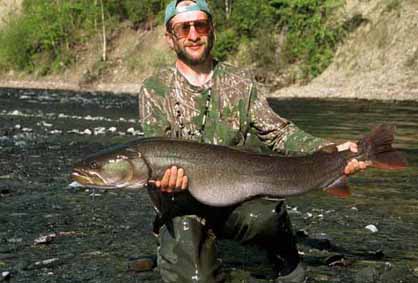 52" Siberian taimen, caught in the Tugur River (photo of O.Abramov)

I was born in USSR, in Ekaterinburg. This is a big city in the Ural mountains, which was at that time called Sverdlovsk. From 1977 I am living in the Russian Far East, in the Magadan city on the shore of the Sea of Okhotsk. For my whole life (from the age of 5) I was an enthusiastic fisherman. First it was bobber fishing in still water, later - spin-fishing for Northern pike and yellow perch. When I was 20, I have first tried grayling fishing in taiga rivers of the Urals. This was my first meeting with grayling and artificial flies - my 2 loves for the rest of my life. It was when I have started to tie my own flies, to invent new fly patterns. My timid attempts to learn the flyfyshing were unsuccessful due to the absence of the fly-tackle in the stores at that time. From my childhood I was reading everything about fishing and traveling. The best writers at that time for me were London, Hemingway, Fedoseev, Arsenyev, Kuvaev... 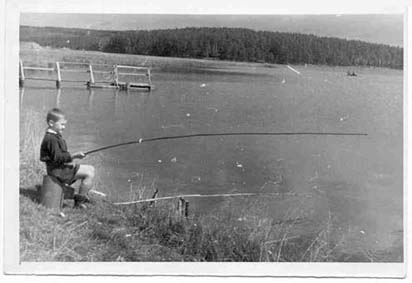 I was graduated from the Biology department of the Ural State University in 1977. At that time I have decided to go as far north and east as possible. Russian Far East for us is like Alaska for Americans - the "last frontier". I have succeeded to organize an official invitation from the Institute of Biological Problems of the North (Rus. Acad. Sci.) - and I still work in this research institute. I am a fish biologist (Ph.D. in ichthyology). Every summer and fall I spend in expeditions. I used to work in different regions of the Russian Far East: Chukotka and Kamchatka, Yakutia and Magadan region, Primorie and Khabarovsk region, Amurski region, Sakhalin and Kuril Islands. The fish which I like the most is grayling, even though I used to work with other Salmonid fish: Pacific salmon, steelhead, charr and taimen.

When I first came to Magadan, I was an excitable spin-fisherman. I have liked other kinds of fishing as well - drift-fishing with salmon eggs, plannerboard with flies, ice-fishing with lures or bait. Abundance of fish was gradually diminishing my interest to fishing - catching fish was becoming too easy. Besides that, use of bait of treble hooks do not suite catch-and-release. In an old magazine I've found the know-how of silk fly-line. Another line I've made out of plastic covering of electric wiring. My first rod and reel were self-made as well. This tackle was rather clumsy, but suitable for practical fishing. I was learning to cast from the magazine articles and English books. With these primitive fly-tackle I've landed several salmon, dozens of charr and lots of grayling. 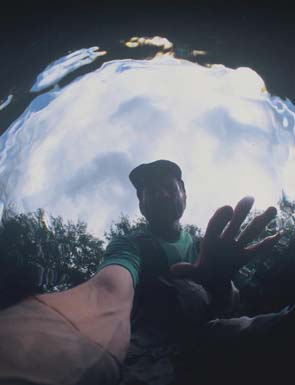 Self-portrait from underwater - this is how the fish see us...

Every summer since 1992 I was working as a guide with fishermen from Western Europe and US; many of them were high class fly-fishermen. In every trip I was doing my job and at the same time learning: learning from the fishermen and from the nature. Russian Far East is true "last frontier" for flyfishermen - many of our sportfish were never caught with flies before. In literature there is no information on such species as Sakhalin taimen, cherry salmon, whitespotted charr - or diverse predators from the huge Amur River. When starting to "survey" these species I had to invent new flies and fishing tactics. From that time I've abandoned the spinning tackle. Drift-tackle I am using only in winter, when it is too cold to flyfish. My recent passion is photography, including underwater photography in lakes and rivers. From 2002 I am at the editorial board of the only Russian flyfishing magazine - "Nakhlyst". 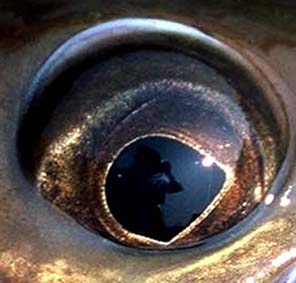 From 1994 till 2005 I was working with the Wild Salmon Center . Now I am free-lance journalist, writing for sportfishing and outdoor magazines, mostly Russian ones. Besides that, I take part in environmental projects of different type, including industrial ecology. I continue working with fly-fishermen, collaborate with sportfishing clubs of the Russian Far East, take part in casting and fly-tying training programs. 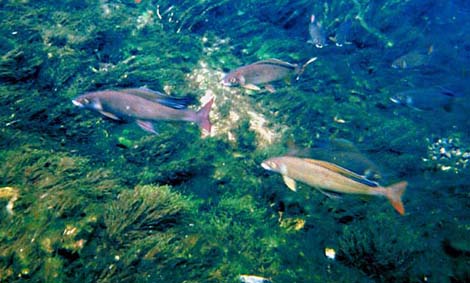