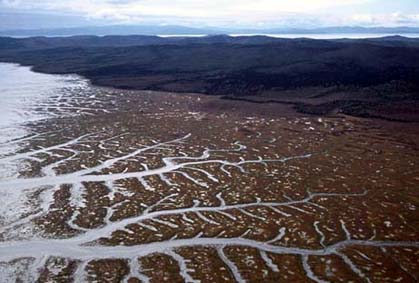 During the low tide vast areas become dry  (coast of the Tugurski Peninsula, Sea of Okhotsk)

Your first journey to the Russian Far East   -  part  2

On the coast of the Pacific Ocean the wind often blows from the sea and brings cold and damp weather. A mixture between rain and fog with a strong wind and air temperatures of 7-8*C is rather common  summer weather in Kamchatka. One American fisherman after three cold and dank June days has said: "I am used to such weather - the winter in Oregon is like that".  Contemporary clothes (fleece+goretex) will protect you from this discomfort. However, on the days with strong rains I wear one more layer - a PVC coat. PVC on the top of a goretex raincoat protects it from becoming damp; this allows me to feel comfortable even after several days of rain.

Summer weather in the areas far from the sea coast (Amur, Yakutia, Upper Kolyma, Central Chukotka) could be very hot, over +30*C. This heat can go with high humidity, and with swarms of biting insects - mosquitoes, black flies, no-see-ums, and horse-flies. This means, do not expect to be able to get rid of the clothes any time! A special "tropical" nylon shirt will be the best "combat suit" on hot days.

To the north from 50° N the water in lakes and rivers is cold, skin-wading is impossible. It is necessary to bring with you a pair of breathable waders. If you plan to hike a lot, or to fish in taiga streams, it will be more handy to use hip-boots. The waders are not strong enough to stand, when you squeeze your way through the impenetrable pine-bush groves or spiny "jungle" of the Sikhote-Alin Range. Long rubber boots are very popular among the Russian fishermen, and you can buy a pair of any size in most our of tackle stores. If you plan to fish the slow waters of the Amur River floodplain, the waders are not necessary as well. Waders seldom have advantages comparing with hip-boots on muddy banks and in the areas, where the big depth often starts right from the bank.

It is better not to use the neoprene waders in the southern part of the Russian Far East in summer - often it will be true tropical heat. The neoprene waders could be used in the North, especially in the spring or fall, when the water is cold. The choice of the wading boots soles is quite important and depends of the area where you are planning to go. Normally I am using simple felt soles. The wading in most of our rivers is safe, you will not need studs, which can damage rubber rafts. When fishing the tundra creeks of the Western Kamchatka you have to hike on grassy slopes and clay banks, where felt soles do not hold. In such conditions I was using neoprene booties for flats fishing - instead of normal wading boots. These booties have grooved rubber soles and are not slippery on any surface, and they are much warmer comparing with normal nylon boots. 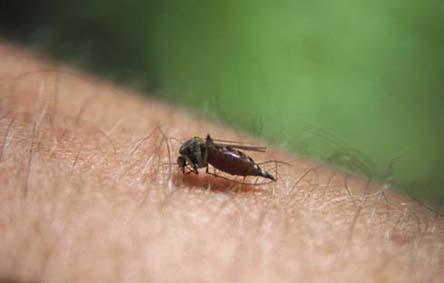 It is necessary to take along strong insect repellents. The best one is 100 % DEET- unhealthy and effective. On the days when the bloodsucking insects are especially active, use head-net. Be sure that the netting of your tent is fine enough, so the no-see-ums will not be able to crawl through it. This is important - these tiny beasts are mostly active at hot, damp nights. If you plan to sleep in log cabins, take a sleeping tent out of bug netting. I remember, that once in July at the Penzhina River I had to make such a tent for my dog, or else the mosquitoes could have eaten it.

If you are planning to come to the southern part of the Far East (Amur region or Primorie) during the first half of summer, be aware of the danger of ticks, which can transmit tick encephalitis. There is information, that in populated areas one tick of 25 has the viruses; in remote territories infected ticks are more rare. The best solution is to make inoculation in advance - some months before the trip. The vaccine is available in Europe and Canada, but not in US. In our region you can buy the anti-encephalitis immunoglobulin. This remedy can be used as a preventive (immediately before the trip) or during the first 3 days after the tick bite. The main (and reliable) way to protect yourself is the avoidance of the forest and brush outside of the river floodplain. You have come for fishing, so stay on the gravel bars. In the willow groves near the river the ticks are very rare. It helps to spray your clothes with tick-repellent. The most dangerous months are May and June. In July ticks become more rare, and by September they almost disappear.

skillful travelers are concerned on it more than on bears.

Venomous snakes are present only in the south of our region, along the Amur River and further south. These reptiles are timid and not numerous; they do not present true danger; particularly for the fishermen which wear waders and other "snake-proof armor". Snakes prefer dry southern slopes and rocky taluses. Be careful when climbing the steep river banks with big rocks and bushes.

In the Far East there is another "venomous" animal with very dangerous bite - brown bear. Bears are especially numerous along salmon rivers during the main run. Along the creeks with pink or chum spawning grounds they make trails, some of them are true "bear highways". In some places in the "best" season you can see several bears a day. Normally the fishing bears are not dangerous. Nevertheless, I recommend to carry a flare pistol or flares. Besides that, it is advisable to inform bears of your presence. When hiking in dense brush, it is better to speak or sing. In this case you will never see a bear - the animals will hear your approaching and give you way. Generally, the forest teaming with bears is less dangerous than big cities at night. 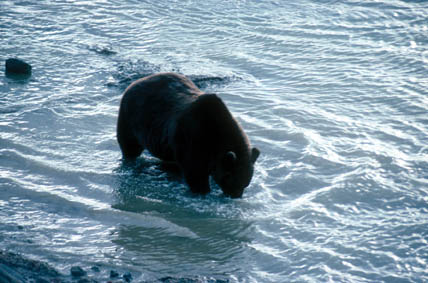 Beginning of the article         Other articles posted at the site