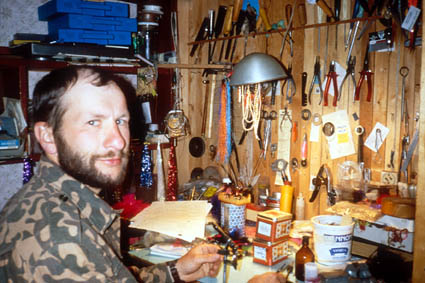 “Thank you, Lord, for the creation of

birds, flying in the skies, and fish, swimming

in the rivers, which we can catch with the

feathers of the birds, flying in the skies”

An old prayer of fly fishermen

Flyfishing is not very popular in Russia until now, especially in the out-of-the-way places far from big cities. On the other hand, artificial flies are used by the Russian fishermen much more often than fly-tackle. Lots of fishermen tie their own flies and use them on a spinning rod or on a long pole with a bobber. Depending on the tackle design, the flies are dragged on the water surface of drift near the bottom. In some regions (such as the Lake Baikal) flies were used for ice-fishing for hundreds of years. Now lots of fishermen in different regions are starting to use flies instead of lures of bait when ice-fishing for grayling, charr, lenok, and other fish.

Flies differ from other lures by their materials: they are made mostly of soft, fibrous materials of artificial or natural origin, which are permanently connected to the hook with thread and glue. Until now nobody could invent machinery which could tie even a simplest fly – all of them are hand-made. Tens of thousands types of flies are already created, but any skillful fisherman has in his “arsenal” models of his own invention. There is no animal or bird, whose fur or feathers could not be used for fly-tying. There are thousands of types of different synthetic fibers, foams, and films, which are produced specially for tying – or are adapted by the fishermen for this goal. Lots of new fly-tying materials are appearing every year. This wealth of ideas, materials, and work methods will literally flood a person who is starting his own tying.

An important issue is definition what is a fly and what is not – this is not that simple. It is easier to tell what is definitely NOT a fly. Such are imitations of insects stamped out of plastic, or fish-like “active” lures made on the base of a twister or another silicon spinning lure. A lure with an active part (propeller or blade made of metal or hard plastic) can not be called “fly”. Such are the combinations of a spinner and a fly, tiny plugs, lures with a spin-n-glow on a wire shaft… 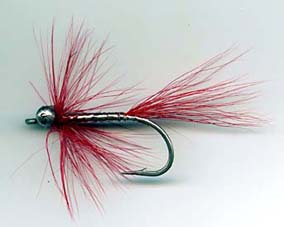 The fly "Comet" is, probably, a shrimp imitation

The border between “a fly” and “not a fly” is rather implicit. Close to that border are the lures created with floating elements of cork or artificial foam. Another example: there is no difference between a wet fly with lead eyes, and a micro-jig for ultra-light spinning tackle. There are lures, which some fishermen regard as serious violation of classic rules, and others use - and sleep the sleep of the just. Such are, for instance, poppers. I agree that a popper with the body of balsa wood or hard foam is close to plugs. But what about a lure, wide head of which is made out of spun-and-clipped deer fur? It is a classic fly tying material, but the lure works as a typical popper. Another example is “Wiggle Bug”, which was invented to use with a flyrod. –“A flatfish-type plug”, - will comment it any gear-fisherman. Out of “legal” deer fur with glue it is even possible to create a full-fledged propeller and set it at the hook shank in front of a fly…

"Wiggle Bug" - this is a foam plug

Many of these “no-fly” lures of smaller size work well on a flyrod. Some of them attract fish even in such conditions (e.g. murky water), when classic flies do not work. Should fisherman use them – it is up to him to decide. Possibly, it is better to stick with a classic fly and convince fish for a bite – in this case you will make one small step in personal growth as a fisherman.

Flyfishing is among the kinds of human activity united by the concept of “game”. This means, we put our own limits and rules, which make the task more complicated to reach. In case of fishing this gives our quarry more chances to “win”, which makes our winning more difficult and hence more attractive and honorable. This is why in no book on flyfishing you will read on some sure tips to catch fish, such as baiting a hook of your fly with a maggot… Fisherman, which needs explanations, why we do not do that, is not a flyfisherman yet. And when the art of flyfishing will delve into his veins, baitfishing will become unattractive by definition.

In contrast to gear-fishermen with the majority buying the lures they fish, many fly-fishermen make their own flies. This is a great hobby, a very pleasant occupation with millions of admirers. For some people fly-tying has become a source of additional or even main income. Fly-tying is now much more than just building a lure to catch fish. There are true artists creating unique and beautiful compositions of feathers, which are not used for practical fishing. The work of art at this photo has required from a skilled Dutch tier several hours to complete! 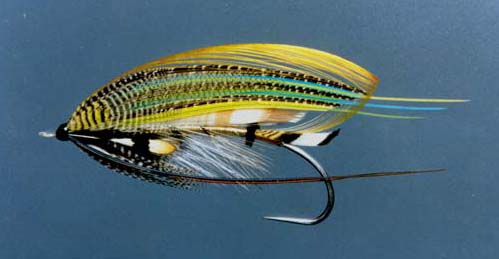 Here I will describe some types of flies which are “working” well in waters of the Russian Far East. A star * is a sigh of a model or a variety invented by the author. After the fly name I am listing fish species which like to “eat” it. Hook sizes are given in standard English system. Correlation between English and Russian systems can be found here.

Tail, back and feelers – the same bunch of pink synthetic fibers and Crystal Flash

Legs – combed fibers from the body, or pink Ice Chenille

The hook of this fly is directed upright. This is one of the best lures for fishing close to the bottom.

There is no need to describe this well-known all-around fly. I tie it in different sizes: best colors are red or purple (salmon); black, olive (charr, lenok and trout), orange, white (Amur River predators)

The only disadvantage of this simple lamprey imitation is that the hook is often catching its tail.

Legs – combed fibers from the body. These fibers should be trimmed on the back and on the sides of the fly.

Back and tail - long strip of black rabbit fur, fastened same way as by the "Zonker" fly

Heavy eyes turn the hook of this fly upward. It could be fished on a swing, or with jerks and pauses (kind of jigging)

Next part of the article